Excerpt from Heart to Heart: The Basic Mechanics of an Intervention
(Part Seven) 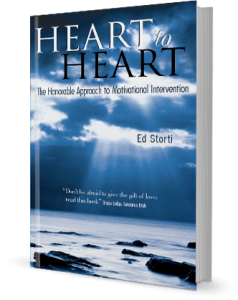 Enough Is Enough: Part One: The Intervention Evaluation

It seemed as if the day would never end; appointments all day and the commute home on the infamous Southern California freeway system cost me an extra hour. I barely had time to grab a bite, kick off my shoes and catch the end of the news on television before I prepared to make a conference call from my home.

I quickly reviewed my notes from a conversation I had had the day before with a young woman named Cindy. She had called me on behalf of her thirty-nine-year-old brother Gerry. Tonight we would talk with their parents, Pat and Lisa, and a cousin named Alex. Cindy had told me that the whole family and her brother’s supervisor at work were worried. He was addicted to alcohol, writing bad checks and spending money excessively. He was recently divorced and lived close to his two children who were seven and nine years of age.

The family lived in New York, only one generation removed from their relatives who immigrated to America from Scandinavia. I needed to get a feeling for the physical and psychological stability of both Gerry and the rest of his family to determine if an intervention would help them or not. I knew Gerry was temporarily out of a job, on a medical disability for stress, but Cindy hadn’t told me he was also addicted to pornography, sex and even cross-dressing. He would purchase new clothes from the finer stores in town and tell the store clerk they were for his wife, charging the expense on a credit card or writing bad checks. But he was so guilt-ridden about the cross-dressing that he would wear them once and then burn them, having to repurchase everything for the next time.

Even over the phone, I could tell that the parents were having a great deal of difficulty admitting to these truths, especially to a stranger. I explained the risks involved in doing an intervention, and that was when Lisa, Gerry’s mother, broke down and left Pat on the phone with Alex and me. She came back on a few minutes later.

Upon further discussion, I decided that an intervention could be very helpful in this situation. The hardest part of the case from a professional standpoint, however, was deciding on a particular diagnosis to address during the intervention. Typically, you give the gift of treatment to someone in answer to his addiction, but in this case, Gerry had so many addictions that it was difficult to tell which one was predominant. This is a sensitive area for the intervention specialist, for the addict may be willing to acknowledge only one particular addiction.

We decided to cite his addiction to alcohol and cocaine as a trend in excessiveness that led him to extreme impulsive behavior. We also wanted to be careful not to expose Gerry’s activities to his employer, because we were not sure how much he knew about the other excessive behavior, keeping in mind that, once in treatment, more would be revealed. We set a date for the following Tuesday. I would fly into La Guardia Airport Monday to prepare the family.

The situation sounded normal enough, but as it turned out, that weekend had started one of the worst storms New York had seen in four years, and of course, coming from the Golden State, my overcoat was the closest I had to winter attire. It was a late flight delayed further, since we circled the airport waiting for the runway to be cleared. I made it to the hotel only to find there had been a clerical error—my room had been given to someone else. Since the weather had delayed so many flights, the hotel was now booked to capacity. I was starving, tired, frozen and not my usual cheerful self. Eventually, I got a room, or rather, a closet. It must have been a hideaway room for one of the employees, but it had a bed and blankets, and once I resigned myself to the fact that there were no coffee shops or snack bars or restaurants open anywhere within walking distance, I decided it would do just fine.